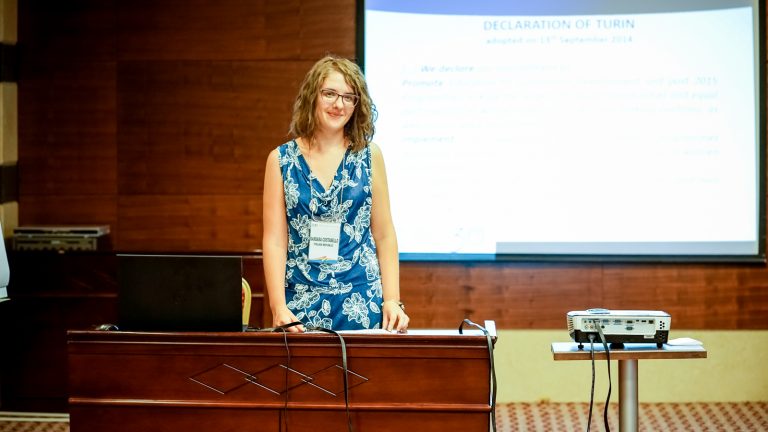 Within UNESCO’s Academy of Young Women, Barbara Costabello, leader of the Youth Section of the Centre for UNESCO in Turin (Italy), presented the activity of the Centre related to gender equality and the International Mediterranean Women’s Forum.

The Centre for UNESCO in Turin is a NGO recognized as International UNESCO Centre. It is a national training organization founded in 1983 and it plans projects and activities in the framework of UNESCO values; these initiatives are aimed at promoting the knowledge and practice of human rights, facilitating dialogue among cultures and generations. It has a Documentation Centre open to the public. Since 1997, it hosts the headquarters of the International Mediterranean Women’s Forum.

In September 2014, the Centre for UNESCO in Turin organized the congress “Global Ethics and Equal Opportunities: Women’s contribution to the development of Europe and the Mediterranean”. The Congress gathered 220 participants from 16 countries: Belarus, China, Cyprus, Greece, Egypt, France, Israel, Italy, Morocco, Nigeria, Romania, Serbia, Somalia, Spain, Tunisia, USA. It was structured in 3 plenary sessions and 3 thematic workshops: Women and Culture, Women and Nutrition, Women and Violences.

From the workshop Women and Culture it emerged that the restoration of works of art by women is essential for historical memory. It was discussed the opportunity to speak of “matrimoine” (mothermony) and not just of  “patrimoine” (patrimony). There is a long list of omissions of women in common knowledge, people are familiar with Leonardo, Picasso, Oscar Wilde or Mozart, but probably don’t know enough of Ipazia, Ildegarda, Artemisia Gentileschi. The contribution of women to culture should become a subject of study to be introduced in schools.

The workshop Women and Nutrition highlighted the key role of women in raising awareness and promoting the preservation and respect of nature by avoiding waste and by developing positive attitudes and best practices in nutrition and healthy food. It was remembered the International Day of Rural Women on October 15th, established for underlying “the critical role and the contribution of rural women, including indigenous women, in enhancing agriculture and rural development, in improving food security and eradicating rural poverty.

The workshop Women and Violences reaffirmed that women’s rights are an integral part of Human Rights. Participants strongly called, in particular, for the right of every child to be registered at birth, to change discriminatory laws against women and to promote education for peace, integrating the respect for human dignity and life.

The Declaration of Turin, adopted by unanimity on September 13th 2014 reaffirms the common engagement in continuing the activities for the safeguard Equal Opportunities for everyone and promote Human Rights, intercultural dialogue, the knowledge and mutual understanding.

The International Mediterranean Women’s Forum is a NGO in official partnership with UNESCO and the Economic and Social Council (ECOSOC), created in 1992 in Valencia. It is a network of associations and institutions, from 20 northern, southern and eastern Mediterranean Countries. Its main goal is to promote collaboration and exchange of experiences between women of the Mediterranean basin and the Balkans, implementing solutions focused on improving Equal Opportunities.

Among its numerous activities, we can recall the training courses held in Turin from 2000 to 2003 for the creation of a network of women trainers in the Mediterranean Basin on the subject “Women, Science and Development”.

In 2004, the IMWF organized, in Burkina Faso, the multilateral Round Table “Poverty and subsistence: quality and responsibility of women’s contribution to the search of solutions”. This round table gathered women scientists coming from 7 African countries: Benin, Cameroon, Ivory Coast, Mali, Niger, Senegal, Togo, for analysing policies and projects realized with the contribution of women in the fight against poverty.