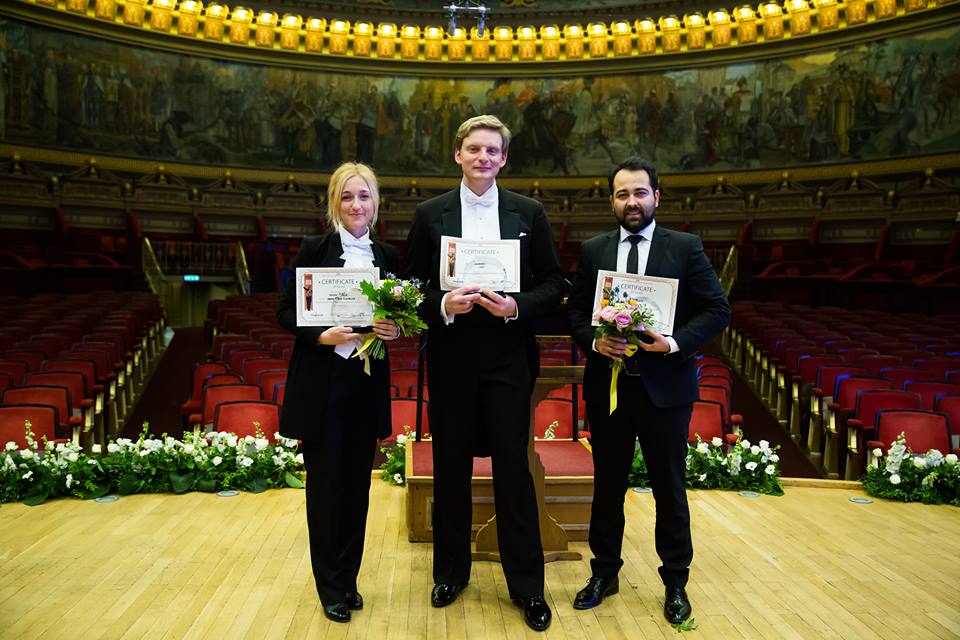 The Capital’s City Hall, through the Bucharest Center for Youth, in partnership with Elite Art Club UNESCO has organized on August 30th in the Grand Hall of the Romanian Athenaeum the Gala Concert which has marked the finale of the 9th edition of the prestigious Jeunesses Musicales International Conducting Competition.
The Jeunesses Musicales International Conducting Competition is one of the most important conducting competitions in the world and it is dedicated exclusively to young conductors. For 5 days, 50 conductors from 27 countries have proved their talent before a jury formed of distinguished personalities: Sigmund Thorp (Jury President), Vasile Cazan, Gheorghe Costin, Christian Ehwald, Bujor Prelipcean, Jacek Rogala and Daniel Weissmann.
Following the eliminatory rounds only 3 conductors remained in the finale which took place on August 30th. The three conductors were Anton Shaburov from Russia, Joanna Natalia Slusarczyk from Poland and Ilie Alexandru from Romania. The 3 prizes were awarded by the Romanian Cultural Institute, which has supported the competition throughout its duration.
Anton Shaburov has already won several important competitions: in 2016 he obtained the 1st prize at the Felix Mendelssohn International Conducting Competition in Thessaloniki, Greece and the 1st prize at the Ilya Musin Conducting Competition in Russia. Since 2017 he is the main conductor and artistic director of the Far East State Symphonic Orchestra (Khabarovsk, Russia). Anton has graduated from two major conservatories and each time he has graduated with honors: in 2008 from the Ural Mussorgsky and in 2011 from the Moscow Tchaikovsky where he studied with the legendary professor Gennady Rozhdestvensky. His professional career begun in 2009 when he became the artistic director and the main conductor of the Simphonic Orchestra of the Mussorgsky State Conservatory.
This year edition’s special guest was the pianist Diana Maria Petrache who graduated in 2017 from the National University of Music in Bucharest as a valedictorian and was admitted at the prestigious University of Music in Hannover, where she is pursuing her Master studies. Diana is an active presence on the concert hall stages and has presented numerous recitals, micro recitals and cameral concerts. The Philharmonics Bucharest Orchestra, despite the fact that it is a young orchestra has proved during this tour de force that it can bring added value on the Romanian cultural scene.
The whole concert was remarkable due to its majestic repertoire and the virtuosity of the artists. The young conductors rose up to the repertoire which included works by legendary composers Schumann, Rachmaninov, Sibelius, Brahms and Dvorak.
The Jeunesses Musicales International project was organized in Bucharest by the City Hall through the Bucharest Center for Youth in partnership with Elite Art Club UNESCO Association, the sole Romanian representative of Jeunesses Musicales International – the biggest non-governmental organization dedicated to young musicians in the world.
Sponsors: Romanian Cultural Institute, CTP, Teilor Jewellery, Hotel Ibis, Hotel Cişmigiu, Hotel Griviţa, Bittnet and Casa de Flori.
Media partners: Forbes, România Liberă, Observatorul Cultural, Societatea Muzicală, Radio România Muzical, Radio România Cultural, Baboom, Klarmedia.