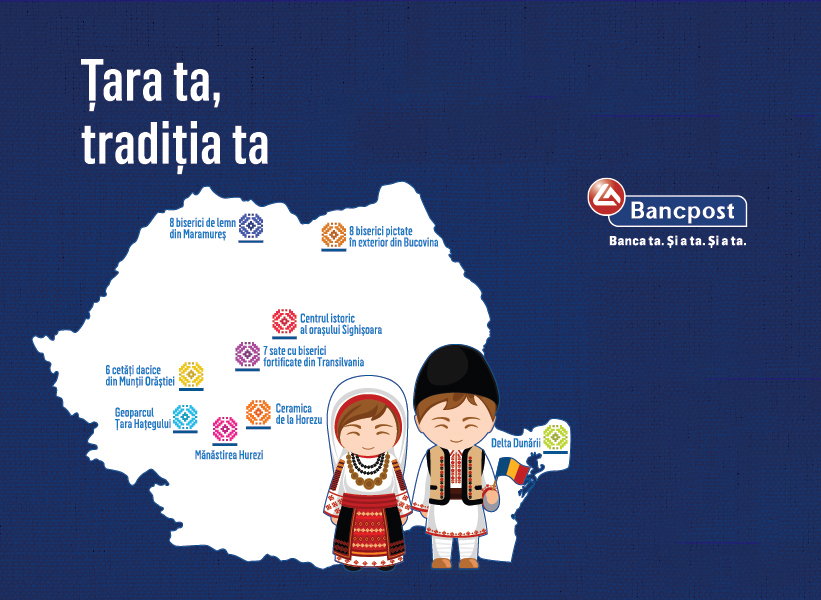 Bancpost and the National Commission of Romania for UNESCO announce the conclusion of a strategic partnership through which the two institutions will carry out actions to promote Romanian cultural values and raise awareness on the importance of knowing and preserving the Romanian UNESCO heritage.

“The partnership with the National Commission of Romania for UNESCO acknowledges the educational and cultural programs initiated and implemented so far by our bank and opens up new perspectives for future initiatives. Bancpost is an active supporter of Romanian cultural values, supporting relevant and impactful projects in fields of national interest: culture, education and society. Through the synergies created between the resources, platforms and competencies of the two institutions, this collaboration will enhance the contribution of joint projects to promoting and preserving the Romanian cultural legacy for future generations.” stated Aura Toma, Marketing and Communication Executive Manager, Bancpost.

One of the largest social responsibility projects, initiated and implemented by Bancpost in partnership with the Ministry of National Education, is the “Ţara ta, Tradiţia ta” (Your Country, Your Tradition) program, the first cultural educational program in Romania focused on promoting the UNESCO Cultural and Natural Heritage in schools. The program, launched in 2017, aims to educate the young generation in the spirit of the Romanian cultural values, of authentic traditions and customs, in order to offer teens safe landmarks, consolidating their cultural identity. In 2018, it will be extended nationally and it will benefit from the patronage of the National Commission of Romania for UNESCO.

“This partnership is an eloquent evidence of the assertion of social responsibility in the private environment, in this case Bancpost, by getting involved in promoting fundamental values of our national culture, such as the natural and cultural heritage, across the entire Romanian society, as well as beyond. The initiative, which was already launched this year, regarding Mărțișor confirms what was previously stated and opens up new strategic cooperation possibilities for the following years,” stated Ani Matei, Secretary-General, the National Commission of Romania for UNESCO.

In 2018, the first initiative as part of the partnership between Bancpost and the National Commission of Romania for UNESCO is represented by the national campaign “Mândru de Mărţisor” (Proud of Mărţişor), which promotes amongst all Romanians the recent inclusion of the Mărţişor tradition on UNESCO’s Representative List of the Intangible Cultural Heritage of Humanity, following the acceptance in December 2017 of the cross-border file elaborated by Romania together with the Republic of Moldova, Bulgaria and the Former Yugoslav Republic of Macedonia, countries in which this tradition is still alive. It is an important recognition which puts Mărțișor alongside the other 14 objectives in Romania which are already part of the universal heritage.

The campaign will run during March on all communication channels (TV, radio, online, social media) so that its message will reach as many Romanians as possible, consolidating their respect for tradition and the feeling of national pride.