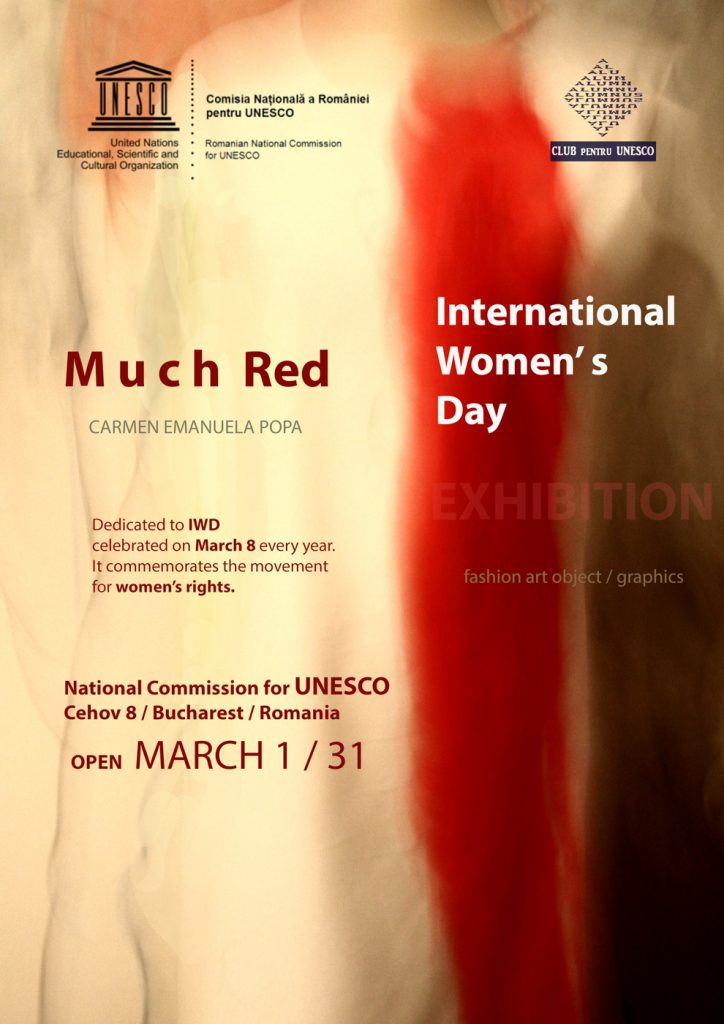 The exhibition organized by National Commission of Romania for UNESCO and Alumnus Club for UNESCO with the occasion of International Women’s Day represents a part of the itinerant circuit „Much Red”, a concept of the artist Carmen Emanuela Popa, dedicated against violence and oppression, introduced with the official opening of the international project “Academy of Young Women. The Fight against Xenophobia, Extremism and Aggression”, a project initiated by NCR UNESCO.

“ “Much Red” is an exposition of ten graphic works, which symbolize,  from a nonchalant perspective of pictorial ink, a series of situations where the human character is involved in the rhetoric, sometimes detached, of the daily torture. The color red, drawn with an unbelievable coherence,  starts from the heart and follows towards the area of steps, in the tumult of words spoken just visually. It explodes as an undefined peal from the spiritual body of the woman and never stops. It is a simultaneous sign of revolt and collectedness in front of adversity. The woman craves for a decreed peace within her worlds, to be entirely reflected as a cover of shining snow over the history. Each graphic work  indicates  an  assumptive experience, with a value of unidirectional manifest  against physical and emotional violence.

The experimental value of this exhibition affirms the existing of just one clothing piece, which seems to be descended from sketches, bringing the female character in our immediate reality. The piece, named as a  fashion art object, is defined from the rest of the exhibition through a serious and imperative posture , an  immaculate allure of white cotton, smoothly designed, over which there is an admirable touch  of universal red, which instigates to nonviolence and a  prompt stop war in the social environments but also in the domestic habitat. The steamy heat that is perceived in this image proclaims the viewer to be witness of a something obvious, the control of responsibility.

The human can be hurt extremely easily, with a word, a question or an answer, with a denial or a statement, and the decision-value deed can kill at any moment. The sentimental labyrinth where the human being can be dragged often turns out to be a fatality.  But the woman’s heart represents the meeting place of all senses in life. The woman gives her infinite gentleness, in the alert rhythm  of a cascade. The woman fights, loves, and leaves behind her forgiveness a heavenly world that she controls from the invisible armchair with the fragile universality of her being.“ (Carmen Emanuela Popa)

The exhibition “Much Red” is opened during 1 – 31 March/2018 at the National Commission of Romania for UNESCO, Anton Cehov no. 8 st., Bucharest.