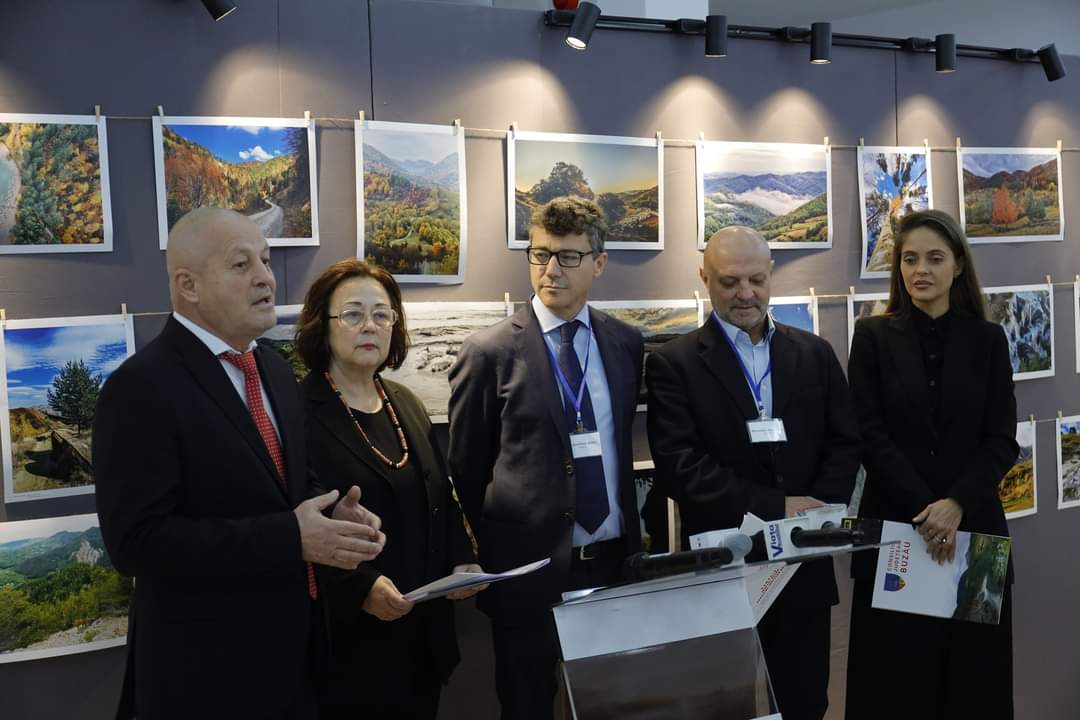 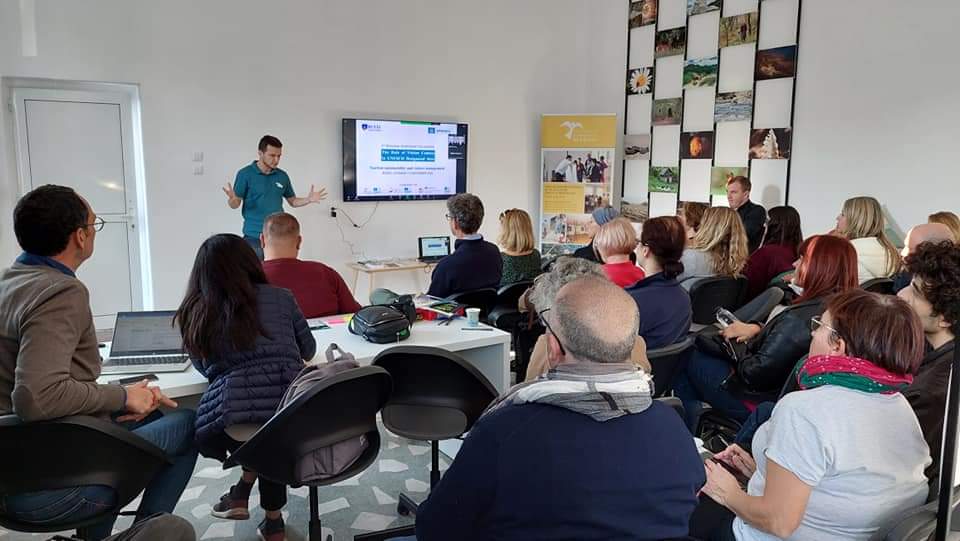 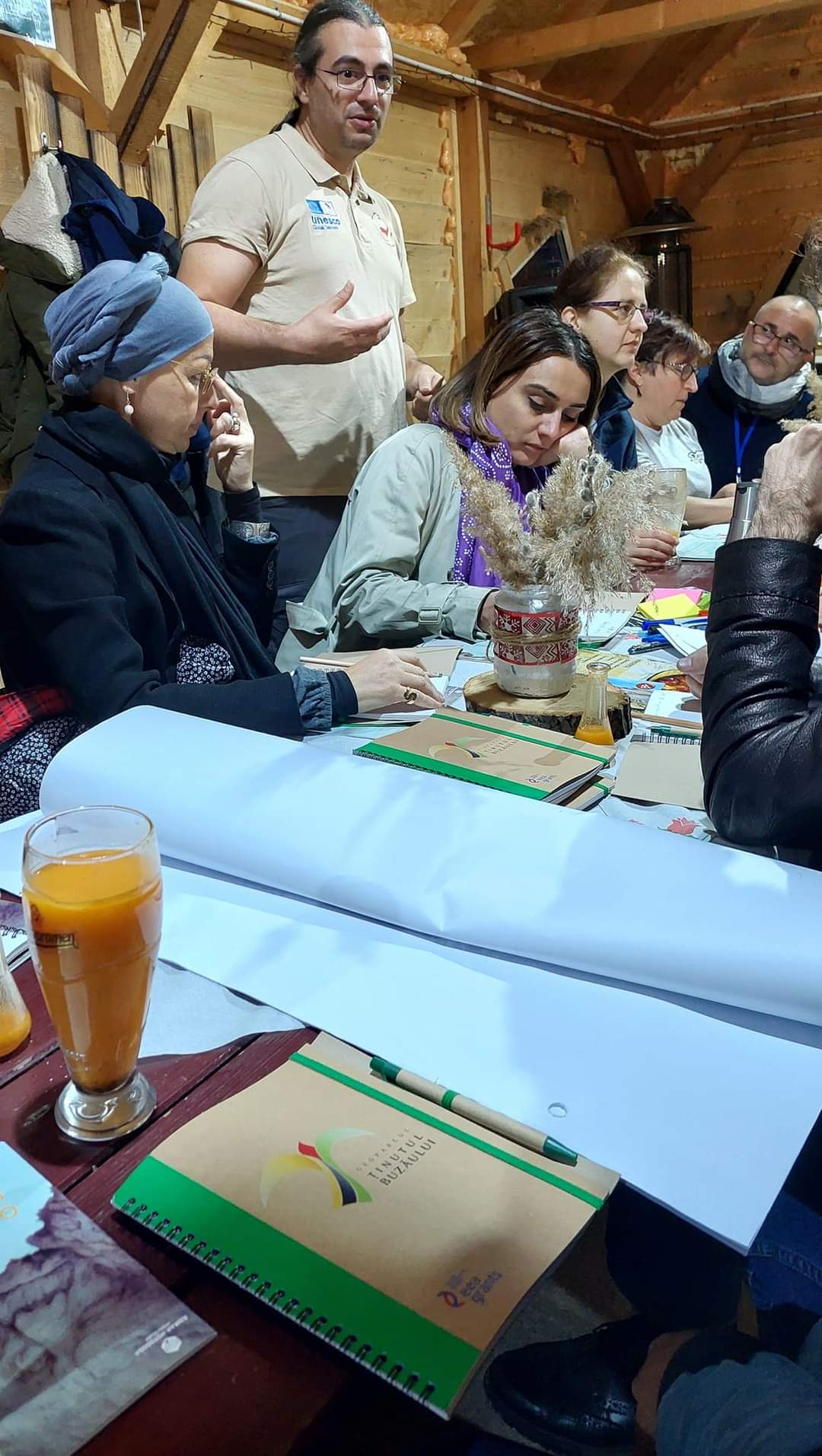 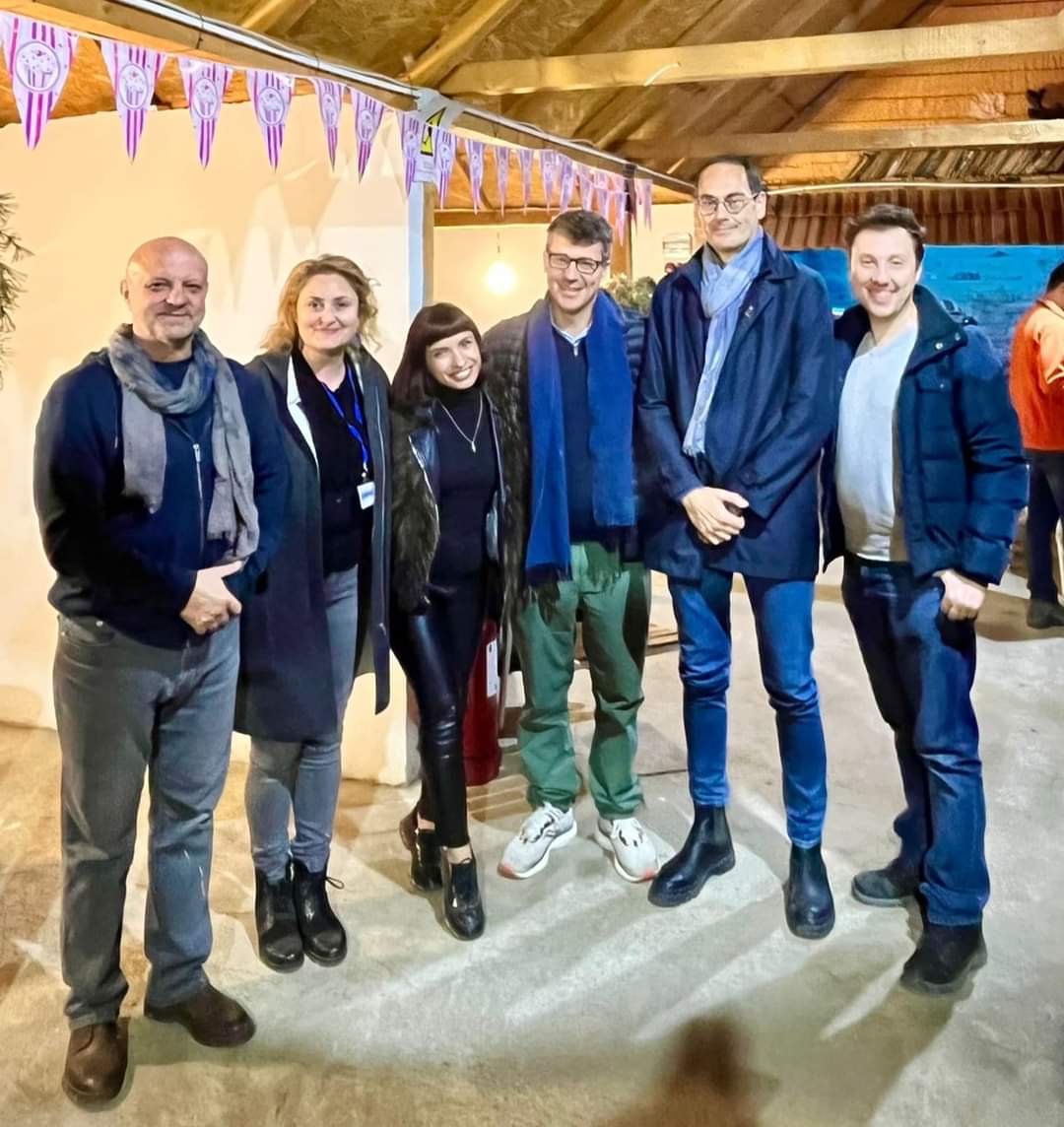 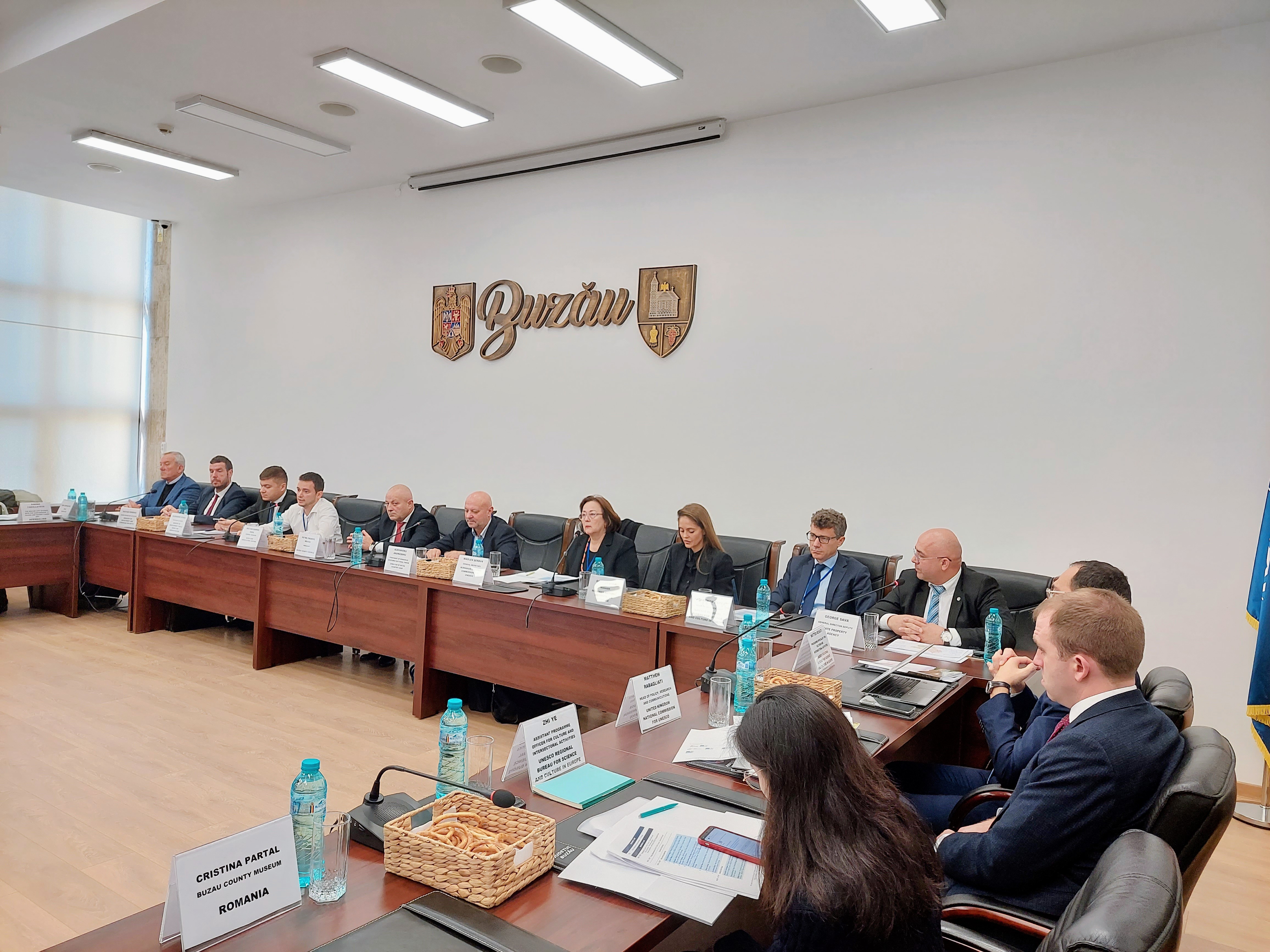 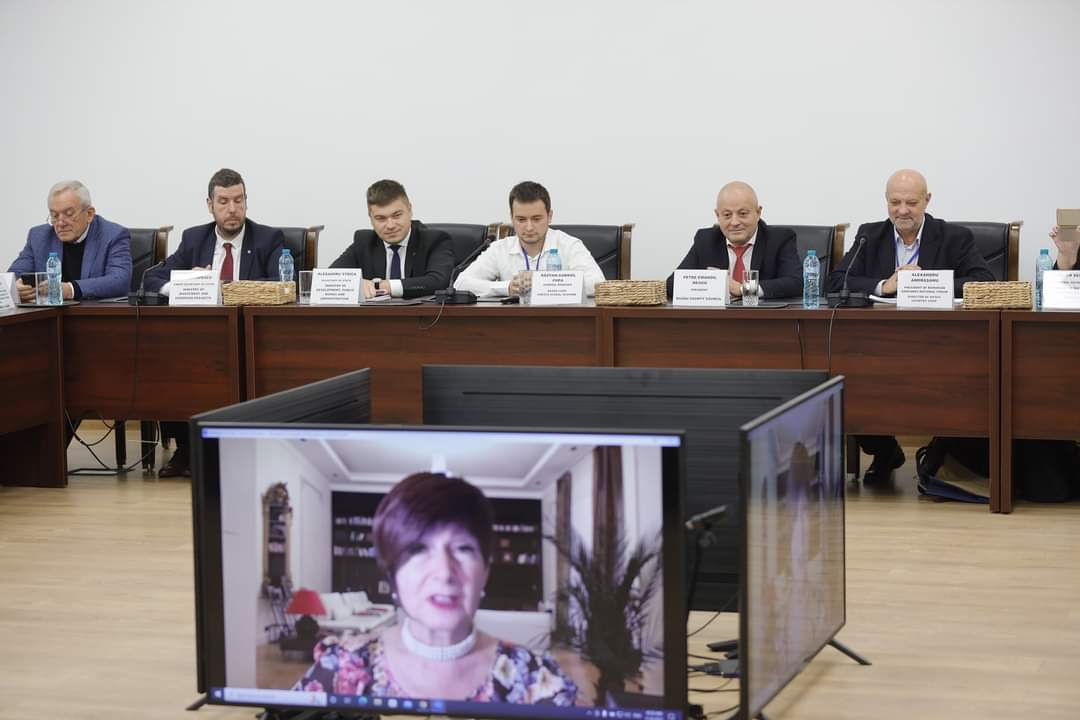 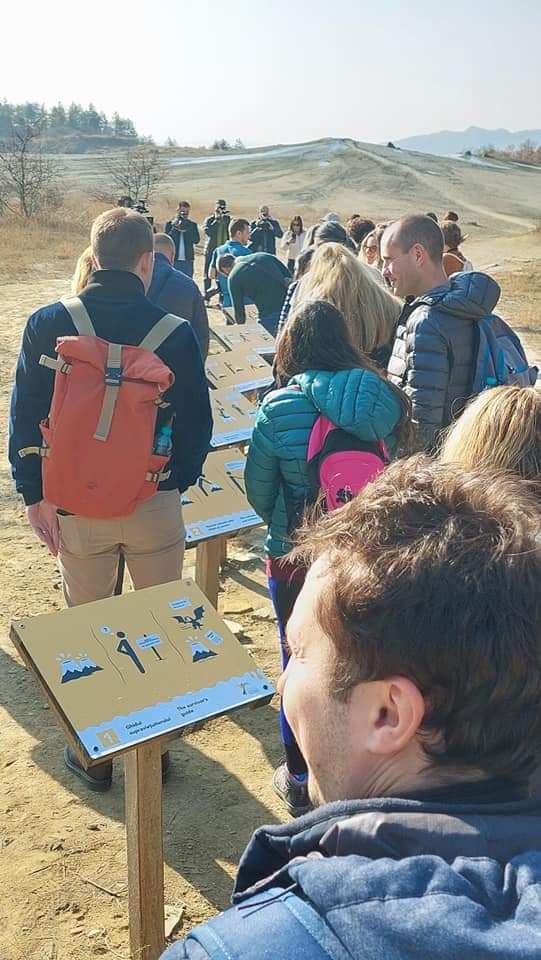 The workshop was organised within the frame of the regional initiative on “The role of Visitor Centres in UNESCO Designated Sites”, launched by the UNESCO Regional Bureau for Science and Culture in Europe in 2018. The initiative aimed to investigate how visitor/interpretation/information centres dedicated to World Heritage properties, Biosphere Reserves and Global Geoparks can contribute to the broader goals of the designations and of the sites themselves.

The  workshop  was  intended  to  enrich  the  interdisciplinary  understanding,  knowledge,  and  capacities  of  participating  Visitor Centres, combined with site visits and meetings with local actors, using Buzău Land as real case study.

The workshop was organised by UNESCO through its Regional Bureau for Science and Culture in Europe and hosted by the Buzău County Council, in collaboration with the Buzău Land UNESCO Global Geopark, the University of Bucharest – the Hațeg Country UNESCO Global Geopark, and the National Commission of Romania for UNESCO.
"The National Commission of Romania for UNESCO addresses special thanks to the Buzău County Council, the host of this event so important for the UNESCO heritage in Romania and for the other 16 participating countries, in the present case referring to the material cultural heritage, the natural heritage - the Man and Biosphere Programme (MAB) and the UNESCO International Geoscience and Geoparks Programme.

The Buzau Land UNESCO Global Geopark, through its excellence and thanks to the involvement of county and local authorities, as well as multiple partners, determined the choice of venue for this event.

Also, the remarkable reputation of the Hațeg UNESCO Global Geopark and the expertise of the University of Bucharest, represented by Mr. Alexandru Andrășanu, were solid arguments in the decision of the UNESCO Regional Office in Venice to organize in Buzău the 4th workshop on the theme of centers of visiting/interpreting and their role in supporting sustainable tourism.

Mrs. Simona Miculescu, Ambassador of the Permanent Delegation of Romania to UNESCO, honored the meeting through a video message:

"I remind you that the Buzău Land Geopark was accredited in April 2022, being recognized as a UNESCO site, for the sustainable way of touristic, educational and scientific exploitation of a special geological and cultural heritage. A great victory for Buzau, a great victory for Romania!

An UNESCO International Geopark is defined as a unique territory, where sites and landscapes of international geological importance are managed based on an integrative concept of protection, education and sustainable development. Started in Europe in 2000, with the creation of the European Geoparks Network, it continued worldwide with the creation, in 2004, of the International Geoparks Network and culminated in the establishment of the UNESCO Program for Geosciences and Geoparks in 2015. Currently, this network includes 177 territories in 46 countries.

For those who don't know, Buzău Land is a rural territory in the submontane area of Buzău County, with elements of special geological interest, which includes 18 municipalities, covers an area of over 1,000 square kilometers and has a population of over 40,000 inhabitants. The Buzău County Council together with the University of Bucharest are the institutions that initiated and coordinated this development project since 2006. In partnership with the Buzău Land Association, with the support of the Buzău County Intercommunity Development Association, the County Council contributes to the fulfillment of all international obligations , supervises and finances management, research, education and promotion activities of the Buzău Land UNESCO Global Geopark".