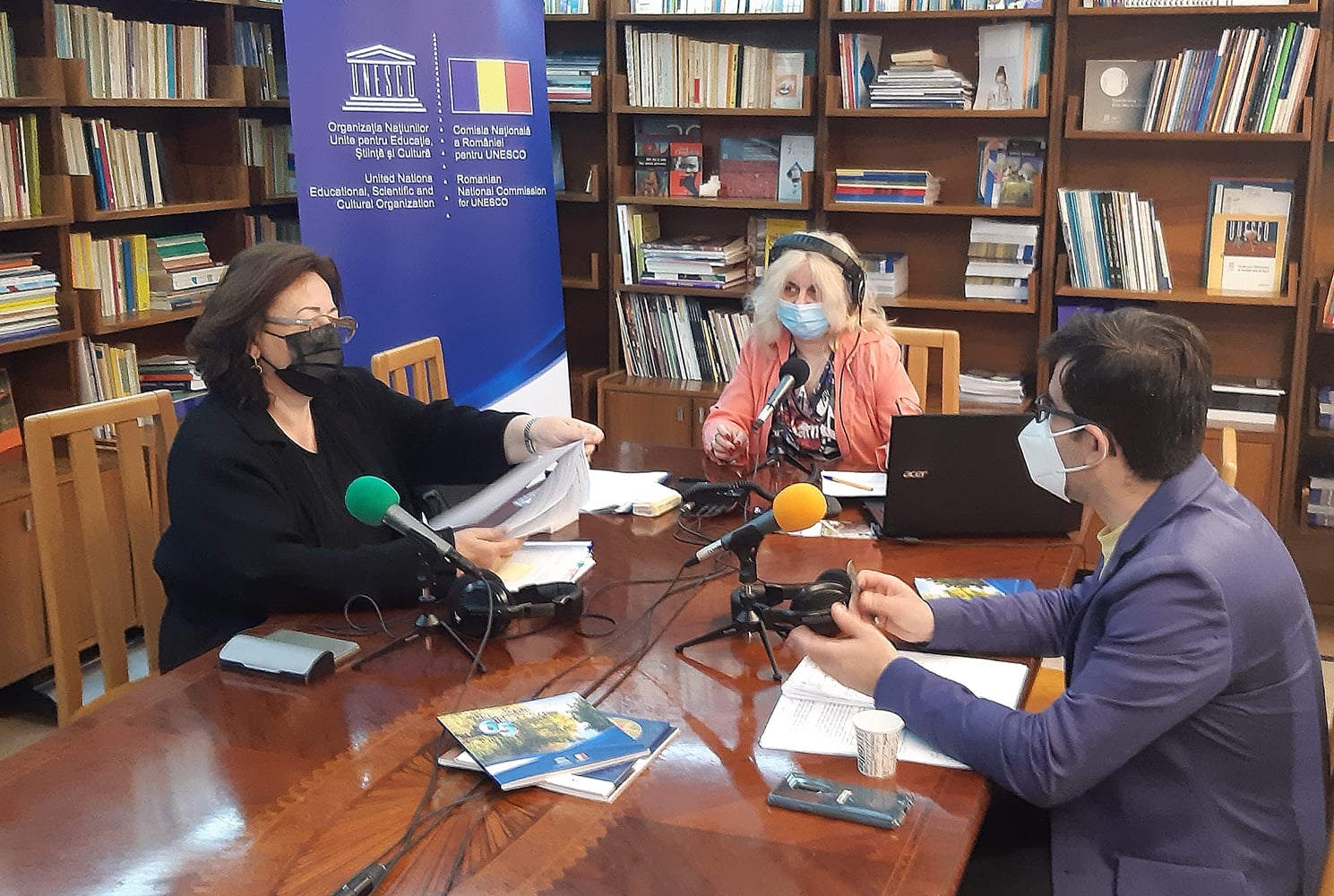 Romania and UNESCO, 65 years since accession - A journey by the waves

Article published on 22-05-2021
Under the title "Romania and UNESCO, 65 years since accession - A journey on the waves", we invited the general public, in partnership with Radio Romania Cultural, to a special edition of the show "With ... weekend mind" . For two days, on Saturday and Sunday, between 10.00 and 12.00, the headquarters of the Romanian National Commission for UNESCO was transformed into a real radio studio. The program was varied, both from a thematic point of view, ranging from aspects related to Romania's cultural heritage or UNESCO anniversaries, to the very current issue of biodiversity, and from the perspective of time, guests pointing both the historical milestones of Romania's activity in UNESCO, as well as the topics on the current agenda.

On Saturday we briefly recalled the history of UNESCO and the National Commission of Romania for UNESCO, highlighted the major topics of interest of the Commission and our partners this year, clarified what is UNESCO cultural and natural world heritage and highlighted Romania's sites from the UNESCO World Heritage List.

Given that on May 22 we celebrated the International Day of Biodiversity, we also discussed the UNESCO biosphere reserves in Romania.

The National Institute for Medical-Military Research-Development "Cantacuzino" also benefited from a special moment, this year it celebrates 100 years since its founding. UNESCO is also associated with this anniversary, in the context in which the Organization has been participating, since 1952, in the commemoration of historical events and in the anniversaries of eminent personalities celebrated by Member States and associated members, to give them world significance.

On Sunday, we talked about the UNESCO intangible heritage, the elements of Romania in the Intangible Heritage List, the new file of the Shirt with Altiță submitted by Romania in March to UNESCO with the Republic of Moldova, the UNESCO Geopark Țara Hațegului and UNESCO anniversaries nominated or supported by Romania.

We sketched the portrait of Eugen Coșeriu, at the 100th anniversary of his birth, one of the greatest linguists of the twentieth century, whose work was considered a revolution in the sciences of language, similar to the revolution produced in Copernicus science.

We also enjoyed the stories of the Romanian Academy about the 65 years of Romania's presence in UNESCO.

We also thank the distinguished representatives of the Presidential Administration, the Romanian Parliament, the Romanian Government and the Romanian Academy for their interventions in the show:
- Presidential Adviser Ligia Deca, Presidential Administration, Department of Education and Research
- Mr Mihai Weber, Chairman of the Joint Standing Committee of the Chamber of Deputies and the Senate for Relations with UNESCO
- Secretary of State Daniela Gîtman, Ministry of Foreign Affairs
- Ambassador Simona Miculescu, Ambassador Extraordinary and Plenipotentiary of Romania to UNESCO, Permanent Delegation of Romania to UNESCO
- Mr. Ioan-Aurel Pop, President of the Romanian Academy

We thank the director of the show "Cu ... minte de weekend" Andreea Ionescu, the reporter Mădălina Corina Diaconu, the editor Ovidiu Chira and the technical team present at our headquarters, made up of Cristian Boita, Bogdan Dumitrescu and Ciprian Ion.