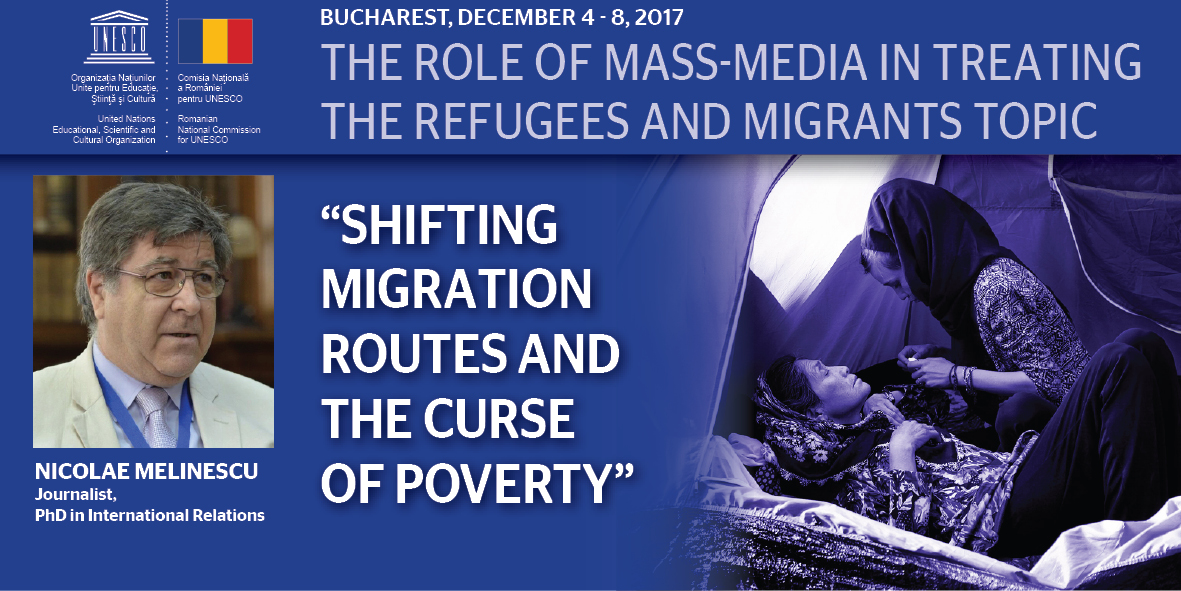 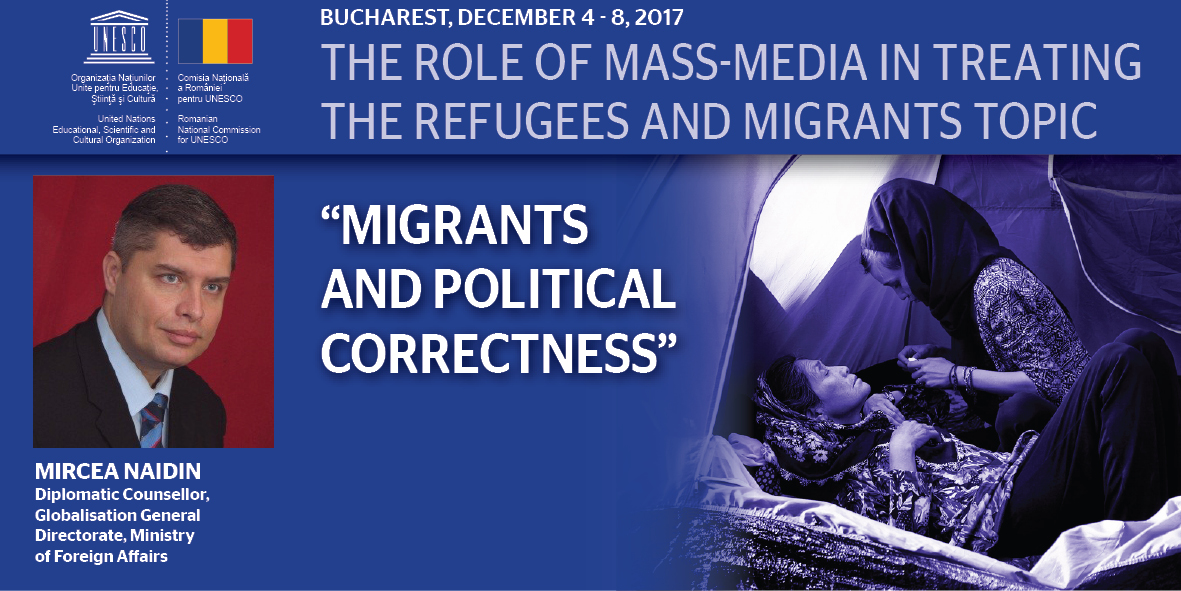 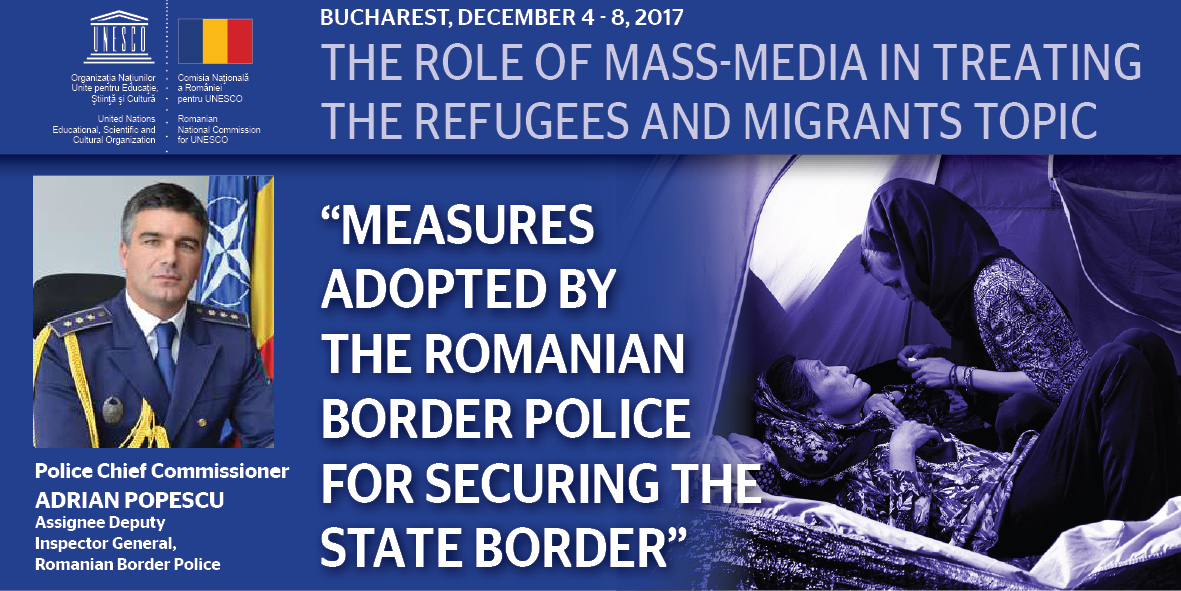 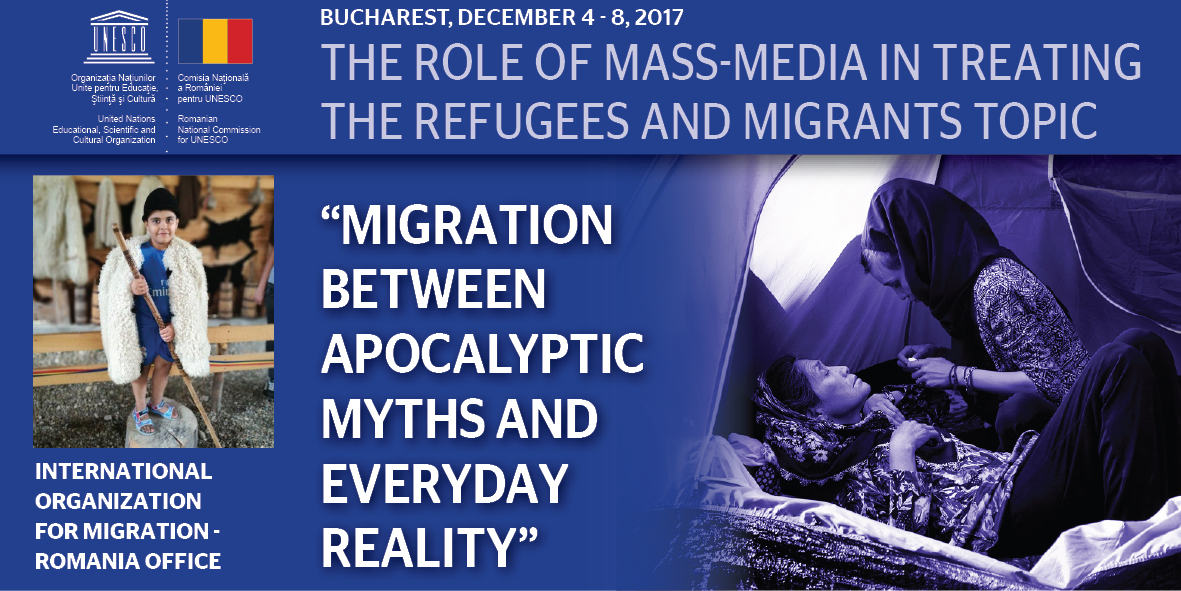 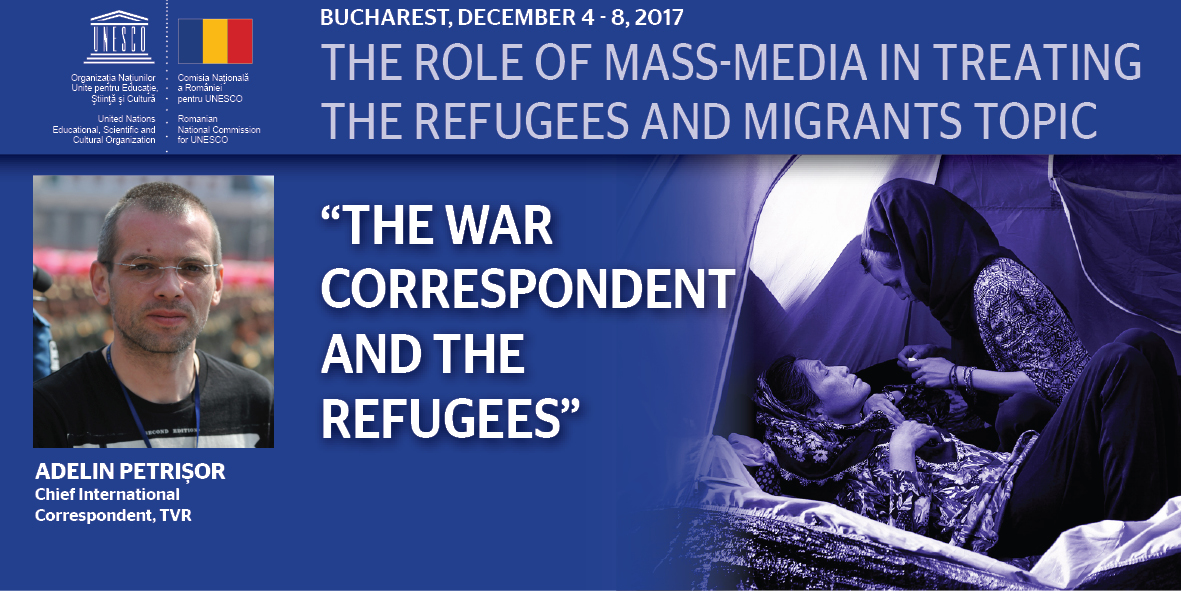 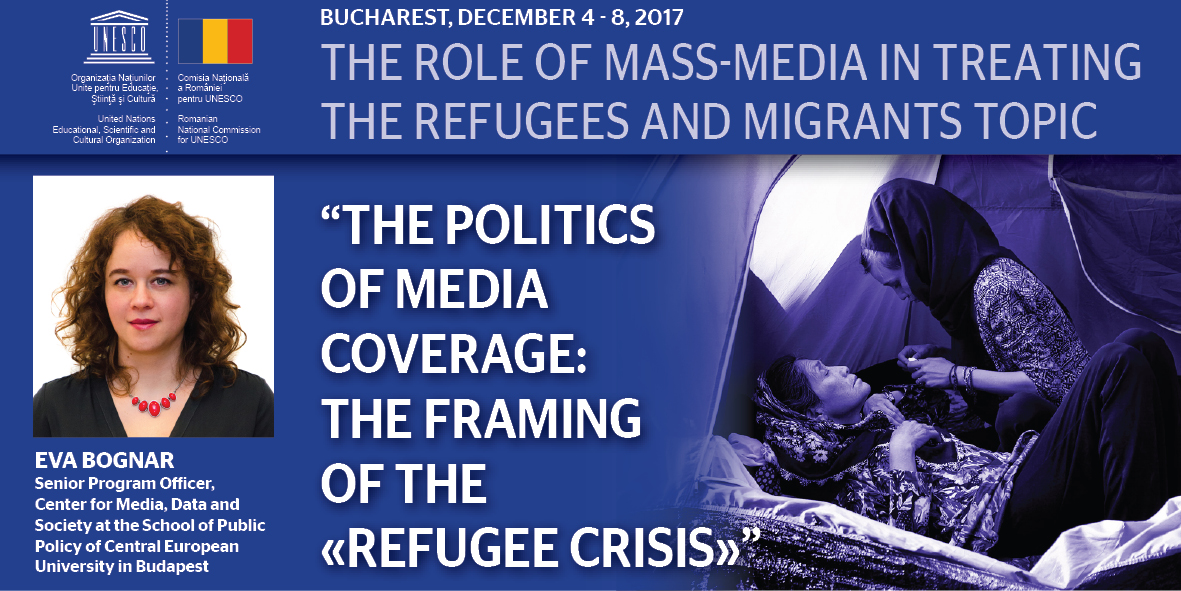 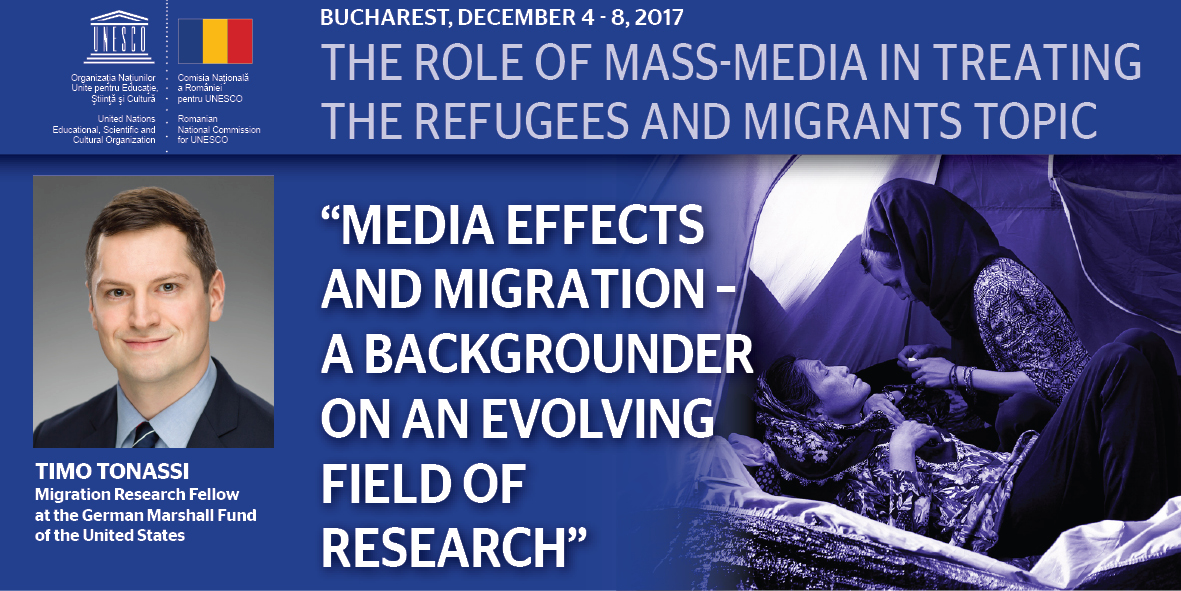 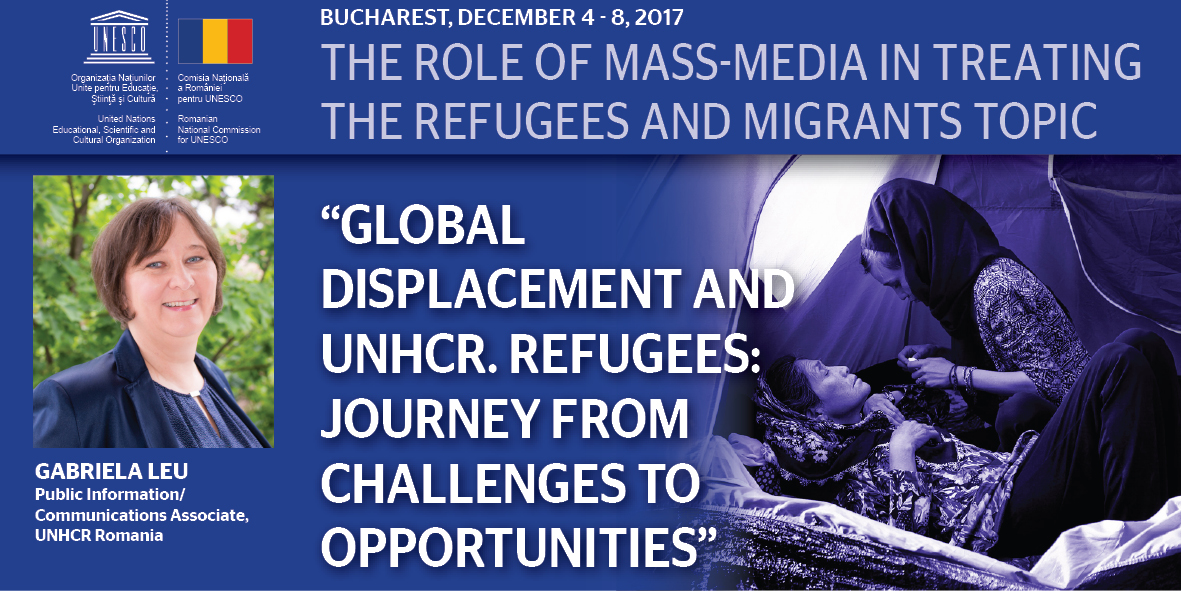 The role of mass-media in treating the refugees & migrants topic

Between December 4 – 8, 2017, the National Commission of Romania for UNESCO implemented the international project “The role of mass-media in treating the refugees & migrants topic”. The project aimed to train 30 media representatives, from 16 European countries and USA, on specific topics related to one of the most sensitive and pressing issues in the region, namely the hosting of refugees and migrants from disadvantaged areas of the Middle East and Africa. Developing knowledge on this topic leads to a more reliable and more accurate media coverage.

The project implied 5 training courses, offered by specialists from Germany, Hungary, United Kingdom and Romania, as well as complementary presentations on topics related to the project theme. Among the institutions and organizations whose representatives were involved in the project activities are the German Marshall Fund of the United States, the Center for Media, Data and Society at the School of Public Policy of the Central European University, the Ethical Journalism Network, UNHCR Romania, the International Organization for Migration – Romania office, the Directorate – General for International Cooperation and Development (DEVCO) of the European Commission, TVR, the Ministry of National Defense, the Ministry of Foreign Affairs, the General Inspectorate for Immigration, the Romanian Border Police.

As part of the project, on Thursday, December 7th, the 2017 Gala of the National Commission of Romania for UNESCO was held, bringing together the project participants and the institutional partners of the Romanian National Commission for UNESCO, respectively representatives of ministries, local authorities, state institutions with UNESCO related competencies, as well as collaborators, personalities from UNESCO’s areas of interest – education, science, culture, communication and information. The guests were delighted with the photo exhibition „On the Path of Hope” by Dimitra Stasinopoulou and the concert of maestro Marin Cazacu and the Violoncellissimo Ensemble, followed by dinner.


The article of Teresa Aburto Uceda, journalist at El Mundo, participant in the project "The role of mass - media in treating the refugees and migrants topic", explores the results of the study "Fatal Journeys" volume 3, part 2, presented by Ignacio Urquijo Sánchez during the visit we made to the International Organization for Migration, Romania office: http://bit.ly/2oFRlbs

Corina Matei, editor of Femeia Magazine, participant in the project "The role of mass - media in treating the refugees and migrants topic", introduces us to the world of women refugees who wish to call Romania "home": https://bit.ly/2JKNNu2