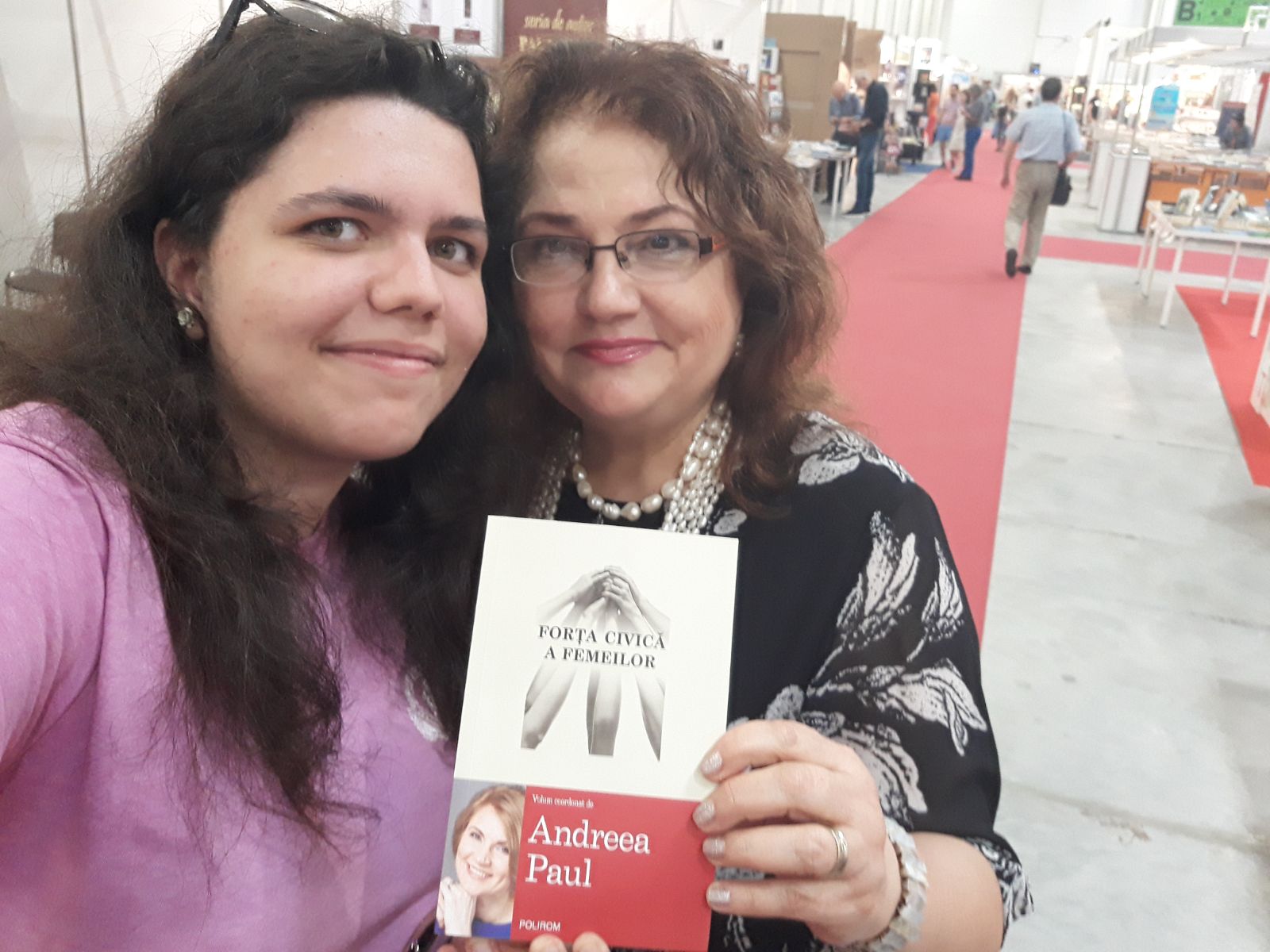 Article published on 02-06-2018
Thursday, on May 31st, 2018, at the Bookfest book fair, B2 pavilion, Agora stall, a stylish and bidder area, was launched the volume Forța civică a femeilor (Women’s Civil Force) in the presence of many book lovers, willing to find out as much information as possible about the role of women in society. As the coordinator of the volume Andreea Paul states, it is a book-manifesto which brings together 100 stories of women from Romania, who, through civic engagement, are changing for the better this country, making it more bearable and even more beautiful.

There are 100 stories, improperly called so, that illustrate the hard work of these heroes in one field or another, over many days and nights, so that the Romanian society evolves and copes with radical changes on the go, and applies new rules imposed by the European Union membership. It is an impressive collection of stories which illustrates the civic involvement of women from Romania in various fields of activity: social, educational, sports, health, arts and culture, science, research. The work carried out in Romania for the application of the UNESCO principles on education, science and culture could not stand aside this volume. Present with their stories are:

Daniela Popescu, President of the European Federation of Associations, Clubs and Centers for UNESCO (FEACU), President Alumnus Club for UNESCO and Romanian National Commission for UNESCO expert: “In December 2016 in Minsk, I have been reinvested as FEACU President, giving me the possibility to connect the European horizons with the others regions of the world through education, science and culture. At the foundation of this construction are over 20 years of work at all levels of representation. The fact that UNESCO’s policies pay special attention to the status of women in the world inspired me to organize the first UNESCO Academy of Young Women in Bucharest in 2017. Why? Because women have a great deal of empathy, workmanship, they are creative and put soul in everything they do. For a woman to succeed in a struggle in which only men have struggled until recently, she has to practice social activism at high standards. She must dare, she must have courage, she must get involved, to know well her potential, her value and, of course, to claim, as the excess of modesty can be at times damaging”.

Elena Preda, Psychiatrist, Director of the Society of Psychiatry and Integrated Medicine, President of the UNESCO Club of Romania, founding member of the Association of Women’s Solidarity from Romania and of the Educational and Christian Association of Romania: “Now, more than ever, the female spirit has to play an important role, it is given to live a creative destiny. There are women who, irrespective of the historical moment they live in, are attracted to deep involvement in solving different crises: climatic, ecological, economic, social, regardless of their profession”.
Crina Decusară-Bocşan, teacher, member of the Writers’ Union of Romania, researcher and writer, president and founding member of the Association for UNESCO “Iulia Hașdeu” , founding member of the Romanian Federation of Associations, Clubs and Centers for UNESCO where she served as president and currently as vice-president: “I will win through myself”- is the motto borrowed from the poetry volume by Iulia Hașdeu and then adopted by the founding members of Association for UNESCO “Iulia Hașdeu”, which has lasted for over two decades, being creatively involved in the life of Romanian society”.

A book that deserves to be kept on the bedside and the story of these women to be read before bedtime. We will know many, many aspects of the problems faced by Romanians. We will be more understanding, better and perhaps more involved in solving them.
Virginia Meheș
President,
Romanian Federation of Associations, Clubs and Centers for UNESCO